Taxes on nursing homes in Alabama have doubled since 2008. You’d probably think the Alabama Nursing Home Association, which is the political voice for nursing home operators, would have spent the last five years protesting the increases, no?

No! The ANHA has consistently supported state tax hikes on its members.

It’s the same ol’ Medicaid formula. In short, states must put up money first before the Federal government will. They support it because the Feds pay out a lot more money than the states do. An estimated two-thirds of nursing home residents in Alabama have their bills paid by Medicaid.

Nursing homes charge private pay residents more for services in the hopes of balancing out costs incurred by accepting Medicaid money. There are few complaints against this practice, probably because private pay clients expect it (hospitals do the same thing). They are also a small minority (about 6% of residents). Private insurance pays for the rest of the nursing home population (about 25%).

It’s not hard to see what would happen if the federal government further reduced funding (which they do every few years). There would be a mad scramble to fill in the shortfall. Maybe then Alabama would softly push nursing home patients to other states?

Medicaid is not an ideal source of funding. Any provider that relies on it is in a precarious situation. That’s why, for every new company heavily invested in nursing homes, at least two existing investors are trying to get out. 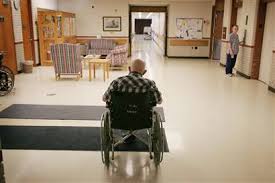