A 95 yo nursing home resident in Chicago died after police shot him with a round of bean bags. According to Wikipedia, the man died from hemoperitoneum, (rapid blood loss from the abdomen).

A private EMS company called the Park Forest police when the man resisted their efforts to commit him for medical treatment.

The police said the nursing home resident was waving a metal cane and a shoehorn. According to the police report, the man was belligerent, refusing to drop the objects. The report says the police first tasered and then fired the beanbag rounds.  The only on-air challenge to the police’s version of the story by CBS News were the comments from other residents.

Nursing home employees said the dead man was a model resident. He was not known to cause trouble. The family of the dead man has retained a lawyer. The evidence against the official story, as well as the public outcry, has forced the Illinois State Police to open an investigation into the incident.

The police are not social workers. That’s what many well-intentioned people who call the police on elderly people forget.  They may not tread lightly. Their mission is to enforce rules and laws. As such, they often escalate thorny situations and stress delicate minds, in the interest of expediency. If anyone at a nursing home chooses to call the police on a resident, he or she must be prepared for a potentially unhappy ending.

The dead man was probably a stranger to the EMS company. They had no stake in his welfare. Had they known him, they might have tried harder to work within the confines of their job. If he wouldn’t change his mind about the medical treatment and was lucid, then they should have just left.

A 95-year-old nursing home resident is hardly a threat to anyone. Hopefully this case is a wake up call to nursing homes nationwide. 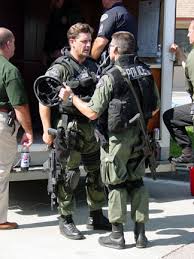